Harriet Edmund finds out why the 23-year debate about Australia’s mandatory helmet laws has just intensified. 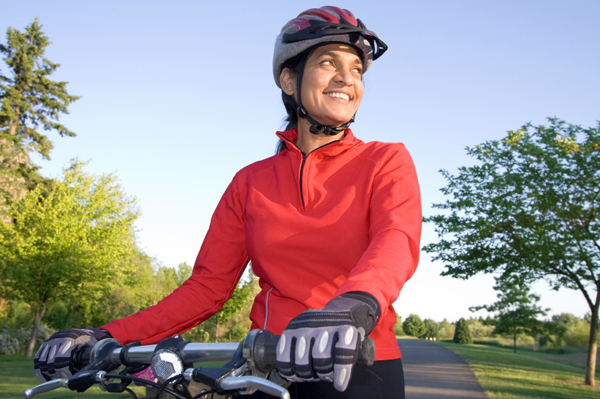 When Meredith Clark woke up at 11am on a summer’s day last year she was lying on the ground on the outskirts of Melbourne’s CBD. She had no idea how long she’d been unconscious.

“I remember slipping as I stood up to accelerate on my bike and the bang when my head hit the concrete. That was it. I blacked out.”

Lack of memory is a classic symptom of concussion—the most common type of head injury. It’s when your brain knocks against your skull and facial bones causing it swell and even bleed.

When the 58-year-old came too, the reality-check sunk in. In her 30 years as an intensive care nurse she’s seen how head injuries from falling off bikes, horses and skateboards can change people’s lives, forever.

“Once your brain is damaged, it never truly repairs itself,” she says. “It’s not like some organs that can regenerate.”

Clark says she was wearing a helmet at the time. A move she believes saved her from a more serious, life changing (or life threatening) injury. The research would agree.

When 2011 University of New South Wales (UNSW) research attributes a 29 per cent reduction in bicycle-related head injury to Australia’s mandatory helmet laws, it’s difficult to argue against the safety precaution. But, there are the vocal non-believers. So when hundreds of international cycling experts gathered in Adelaide for the Velo-city Global conference in May, opposition to the helmet laws was fierce.

Australia was the first country in the world to enforce mandatory helmet laws, costing you a $A57 and $A180 fine depending on which state you offend in.

With few countries taking up the laws since Australia did in 1991, international cycling circles are often quick to criticise the rules. Velo-city Global delegates from New York, Israel and Copenhagen were among those to speak out against the legislation. They argue it’s better infrastructure, not helmet laws, that improves safety for cyclists.

Sydney University’s Professor Chris Rissel, who presented at the conference, agrees: “Most other countries recognise these laws are a failure because of the clear adverse consequences such as reduced cycling participation and the perception that cycling is not safe,” he says.

Some of Prof Rissel’s latest research, published in the Health Promotion Journal of Australia, shows one third of 600 Sydney respondents do not support the laws, while one in five would cycle more if they did not have to wear a helmet.

“The greatest gains in cycling safety will come from more and better cycling infrastructure that separates people from traffic,” he says.

A similar assessment was made in a 2011 national Riding a Bike for Transport survey. The main reasons the 1,000 online respondents gave for not cycling more often were unsafe road conditions, speed and volume of traffic, a lack of bicycle lanes and safety. Lack of time or motivation featured well down the list.

It’s a view Garry Brennan, Bicycle Network’s General Manager, Government and External Relations both agrees and disagrees with. He agrees that better infrastructure is needed to retain and increase the number of people cycling. But he maintains helmets are still necessary to save lives. “We know from our insurance claim data that crashes happen even on the best infrastructure with no cars involved.”

The cycling fraternity watched closely to see if Australians would be turned off riding when the laws were introduced. After all, back then; helmets were available in either Stackhat or bulky foam varieties.

Ian Ker, Principal at CATALYST (Consulting in Applied Transport, Access and Land Use Systems), who based his Velo-city presentation on a paper titled, Neo-Political Action and a New Public Policy Paradigm—A case study of mandatory bicycle helmet laws, claims participation rates fell by two-thirds between 1986 and 2006.

Monash University Accident Research Centre (MUARC) also found there was an initial reduction in the number of people cycling in Victoria when the legislation was introduced. However, it reported within two years the number of bike riders returned to levels similar to those prior to 1991.

Mr Brennan doesn’t blame the helmet laws for the decline; he attributes the lull to social change. “Instead of kids riding their bikes or walking to school more were being dropped off by parents as more women joined the workforce and we saw the rise of the two-car family,” he says.

But Prof Rissel argues the rates would be higher – and therefore more Australians active and healthy – if riders didn’t have the inconvenience of wearing a helmet. “Mandatory helmet laws are a barrier to cycling, particularly spontaneous and short trips,” he says.

Australia’s first bike share scheme, described by VicRoads as helping to promote cycling trips under 10 kilometre around Melbourne, was an example of the helmet laws causing riders to balk at bikes. The slow uptake of the scheme launched in 2010, eventually resulted in the state government introducing a complementary helmet trial in April 2013. Participation rates went up, and now $A5 helmets are available at retail outlets and vending machines around the city.

In Queensland late last year, a parliamentary inquiry recommended helmet law reforms to allow cyclists on share bikes to ride helmet-free. It also submitted giving cyclists the choice to wear a helmet if riding in parks, on shared cycle paths, and roads with a speed limit of 60 km/h or less. While helmet choice campaigners such as Freestyle Cyclists backed the proposals, Scott Emerson, QueenslandTransport Minister, rejected the recommendations. He says the overwhelming scientific evidence supports the effectiveness of helmets in reducing head injuries.

And, what about head injuries? According to 2011 NSW research led by Dr Jake Olivier, the rate of head injuries reduced by almost a third after the laws were introduced. But Prof Rissel criticises the claims saying the results are not warranted because of the limited time period used in the analysis—36 months—and the lack of data beyond a few years before the introduction of the legislation.

“The overall trend in cycling injuries was downwards from the 1980s on, in Australia and globally, and the legislation did little to affect this trend,” he says.

But in another UNSW study, researchers found helmet wearing reduced the risk of severe head injury by 74 per cent. The study assessed the cases of 6745 cyclists involved in collisions with motor vehicles in NSW between 2001 and 2009. The injuries included skull fracture, intracranial injury, concussion and open head wounds.

Dr Steven Pincus, deputy director of the Royal Melbourne Hospital emergency department, says while his hospital does not keep a record, the most common reason for cyclists being admitted is also because of collision with cars. He finds most cyclists wear a helmet, which appears to reduce the severity of their head injuries. “There are a significant number of patients who come in with smashed helmets and intact heads,” he says.

Helmet law skeptics argue being told to wear a helmet for your own protection makes people think cycling is dangerous. “The perception that cycling is not safe is probably the main reason why more people do not cycle,” says Prof Rissel.

At the Velo-city conference, CATALYST’S Mr Ker told delegates that wearing a helmet negatively affects cycling activity by lowering riders’ level of confidence and increasing the feeling of being unsafe when cycling on the road.

“Mandatory helmet laws actually make cycling less safe for those who continue to cycle in three ways,” he says. “Cyclists who wear helmets tend to ride faster in comparable situations, than those who don’t. Motor vehicle drivers pass closer to cyclists wearing helmets than those who are not, and fewer cyclists translates into increased risk through reduction in the safety-in-numbers effect.”

A 2009 report titled Research into Barriers to Cycling in NSW also found ‘the perceived danger of cycling’ to be one of the biggest turn offs.

When it comes to where you ride, Prof Rissel told conference delegates some types of cycling carry much greater risks than others. You might consider road racing at high speeds far more dangerous than coasting along a suburban bike path, for example.

(Incidentally, it was the fall and death of professional cyclist Andrei Kivilev in 2003 that promoted the Union Cycliste Internationale (ICU) to implement the compulsory wearing of helmets in all endorsed races. The 29-year-old was racing in the second stage of the Paris-Nice when he collided with a teammate. He was airlifted to Saint-Étienne hospital, where he was diagnosed with a serious skull fracture and two broken ribs. He died of his injuries the next day.)

Or like Ms Clark, you may know if you’re riding a bike, wearing a helmet is just a no brainer. She says

As her helmet saved her on that fateful Saturday morning she was taking a casual spin along a bike path. “I was riding slowly with no other bikes or traffic around when I came off,” says the St Kilda Cycling Club member. “I landed head first, cracked my helmet and truly believe if I wasn’t wearing it I would have fractured my skull.”

A 2013 Bicycle Network count of commuter cyclists around Melbourne, shows 99.8 per cent of riders find wearing a helmet normal. “No one thinks about whether it’s a good or bad idea to wear one, whether helmets work or not or if their hair is going to get messed up, it’s become an automatic response,” says Garry Brennan, Bicycle Network general manager, government and external relations.

Even in Denmark where there are no helmet laws Danske Cykelhandlere, the Danish Bike Industry Association, reported in 2010 that helmet use was steadily rising, led by women and children.

The same cannot be said for Australian youth, with a NSW study, The effectiveness of helmets in bicycle collisions with motor vehicles: A case-control study, finding children and teens were far less likely to wear helmets than adults. The research showed, of the 6745 NSW cyclists involved in collisions with motor vehicles between 2001 and 2009, almost 50 per cent of 0 to 19 year olds were not wearing a helmet at the time of their accident, compared with 15 per cent of 30 to 39 year olds.